“Yes, my scars shape me Today; I have learnt to cover
it with fabric made of hope, faith, perseverance, and determination. For this, I am grateful to life”
Vijaya Gowrisankar

That was the early morning when in a dream, Jorge Carrasco had an epiphany, a life-changing moment.

Up until that day, he had known that he needed to make a commitment. A single thought which would catapult him to say, without doubt, reservation, or fear, “I CAN DO ALL THINGS. But not just for him, but for all those around and even those that he would come to know. As Art Turock wrote: There’s a difference between interest and commitment. When you’re interested in doing something, you do it only when circumstance permit. When you’re committed to something, you accept no excuses, only results.”

Today, Jorge still holds to that commitment made in the early morning of October 12th. Knowing fully that what he had committed to, there was going to be someone to tell him that he was wrong or the countless difficulties arising which tempted him to believe that his critics were right. But with commitment, courage, 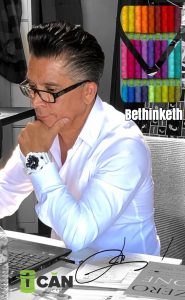 and reliance he mapped out a course of action, and today, that dream is now turning into a brand.

I Can do all things….